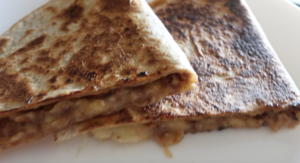 Can you tell I had a hard time coming up with a proper name for this? I can’t call it easy hotteok recipe, because it’s not really hotteok; simply inspired by hotteok. If you have no idea what hotteok is (and I don’t blame you if you don’t know what it is haha), it is a popular Korean street food especially in the winter time because it’s warm and comforting. It’s basically a sweet pancake with a brown sugar filling and it is cooked with a lot of oil to make it extra delicious. It’s super addictive and yummy but also probably quite a bit of work to make and also quite fattening. It was definitely one of my favourite treats as a kid!

So today we’re gonna make the much easier and healthier version which you can make right now at home with minimal ingredients! We’re going to be lazy and not make any dough – we’re just using a soft wheat tortilla wrap for this. 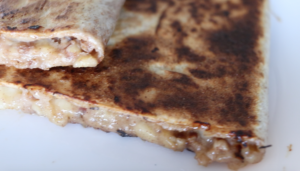 If you are familiar with my Peanut Butter and Banana Quesadilla recipe – it’s pretty much a very similar idea. We’re making a sweet quesadilla! 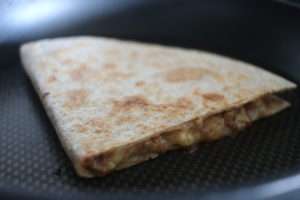