Watch the video above to see me torturing myself!

A few months ago, when my friend Daniel came to visit home, I made him do the “extreme spicy noodle challenge” with me. If you have been living under a rock and you haven’t heard of this challenge, it’s basically where you take what is apparently the WORLD’S SPICIEST INSTANT NOODLES and you eat them on camera to record your reaction.

These spicy noodles are from a Korean company called Samyang. Initially they came up with the EXTREMELY SPICY CHICKEN FLAVOUR RAMEN which began the Spicy Noodle Challenge. And then they decided to release the 2 TIMES SPICY version of the same noodles… Meaning exactly that… 2 times more spicy! This now became the NUCLEAR FIRE NOODLE CHALLENGE. The 2x more spicy noodles are 8706 Scoville Heat Units (which apparently means they are very spicy…). 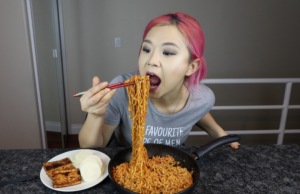 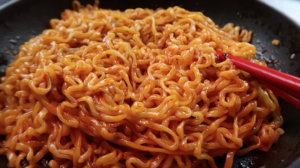 The first time I did this challenge, Daniel and I each had one pack. I thought I had followed the instructions which said to leave some water with the noodles and not to drain all the water out. But a lot of people commented saying that the noodles should not have any water and that I was cheating! So I thought I’d re-do the challenge by draining all the water and just mixing in the spicy sauce. I also thought I’d kick it up a notch by eating 2 PACKS instead of just the one pack of noodles.

Watch above to see how I did… also… DON’T TRY THIS AT HOME!