This isn’t your average 3 ingredient vegan waffles recipe; it’s a super tasty, fast, and unique way to make vegan “waffles” using 3-ingredients for lazy adults (like me!) and a super fun recipe for kids!

This vegan recipe only takes 4 mins and is perfect for quick morning breakfast! It can be made gluten-free and topped with anything you like.

This recipe is also perfect for students on a budget who have a waffle iron as it’s a college dorm-friendly recipe!

I’m going to show you how to make a 3-ingredient vegan waffle for one, or vegan waffles for more than one person!

You might think I’m going to share a recipe for vegan waffles using oats, oatmeal or packaged mix but you’ll be surprised to read that we’re using bread instead!

Now hear me out… If you grill two slices of bread with your favourite filling and grill in a waffle iron in 2 mins, you’ll have a vegan waffle! Thanks to the waffle iron, it toasts the bread so perfectly and it almost feels like you’re truly eating a waffle without the mess of blending oats, mixing flour, or boxed waffle mix.

It also looks like a waffle, especially if you cut the sides off

You can make this gluten-free by using gluten-free bread! Kids love this recipe for breakfast or even for school lunches! College students also love it because it’s super easy to make using a waffle maker, bread, and PB&J!

How To Make 3-Ingredient Vegan Waffles

All you have to do is butter one side of your bread slices, fill the other side with an ingredient (or two!) like peanut butter & jam, or vegan Nutella, close it up, put it in your waffle iron, and BAM! You have 3-ingredient vegan waffles in 2 mins!

Enjoy as it is or add other toppings such as cinnamon, berries, powdered sugar, or maple syrup! 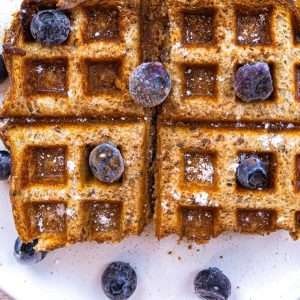